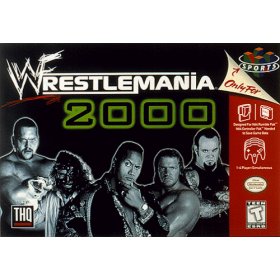 Back in college, I briefly had the editorial reins of the entertainment section in an alternative (read: unpopular) campus paper. One of my few accomplishments was an Oscar prediction article pitting our resident film critics up against Wrestlemania 2000, the old then-WWF game for Nintendo 64. It was supposed to be a stupid gimmick, something I have built a reputation on over the years. But then Wrestlemania 2000 went 5-for-5 and blew our “experts” out of the water. Ever since, I’ve blown the dust off the N64 every February to get new insight into the upcoming Academy Awards.

The Rules:
1. For each of the categories (Lead Actor/Actress, Supporting Actor/Actress, Director, Picture and one wildcard choice), I automatically eliminate one nominee. To do this in a fair and even fashion (as opposed to the old way when I picked someone whose name or face I didn’t like), we consult Vegas odds. The nominee with the least-favorable odds gets cut. Odds were provided via Bodog as of 2/18.
2. The remaining four nominees per category are matched up with a character from WM2K’s extensive circa-1997 WWF roster. No wrestlers are repeated during the contest.
3. Those four wrestlers per category are placed in a four-man elimination Royal Rumble match, with the rules tweaked to reflect a “Fatal 4-Way Elimination Match” by WWF/E rules – aka, the last man standing is the Oscar winner.

Read on to see the results.

The first category is a damned crying shame, because Philip Seymour Hoffman, who practically drove Charlie Wilson’s War by himself as the ultimate Aaron-Sorkin-secondary-male-lead character (aka the Jeremy Goodwin, the Sam Seaborn, etc.), is the longshot at 16/1 odds. The man deserves a statue…but rules are rules, so he gets bounced.

It’s bedlam from the start as all four men brawl it out. As Holbrook and Bardem get into it, Affleck uses his speed to wear Wilkinson down. After a pair of top-rope legdrops, he finds an opening and rolls Tom up with a cradle for the elimination at 7:21. Affleck and Holbrook team up on Bardem, who retreats and grabs a foreign object from outside the ring to even things up, bloodying Holbrook in the process. Eventually, Holbrook turns on Affleck and Bardem picks the spoils, pinning Casey at 10:10 after a short lariat. After the fall, Holbrook continues the assault, locking Affleck in a figure four and chasing him out of the ring. As Bardem comes out to join them, it turns out to be a trap, as Holbrook jumps Bardem and beats him down. He rolls Javier back in the ring and locks in another figure four, getting the tap-out at 11:34 to score a huge upset.

The little girl from Atonement had a whopping 35/1 odds, way behind virtually every other candidate. According to Vegas, she’s the only one who has no conceivable shot at this trophy, so she is eliminated early.

Battle lines are drawn early as Dee and Ryan duke it out while Swinton and Blanchett hook up. While the former is a back-and-forth affair, the latter is more of a woodshed beating. Swinton barely gets any offense in as Blanchett takes her to task, finishing with a figure-four leglock for the submission elimination at 4:13. For the next eight minutes, the remaining three trade double teams and double crosses, with no woman gaining a clear advantage. Finally Swinton gets her revenge, pulling Blanchett out of the ring for an outside brawl. Left alone, Dee crushes Ryan with an avalanche and collects an easy elimination at 12:38. Blanchett comes back in with a vengeance, but Dee powers back. Dee hits a flying elbow, a lariat and a backdrop driver, but Blanchett refuses to go quietly, fighting back as best she can. A second lariat is too much, though, and Ruby Dee pins her for the win at 14:10.

There are no published odds on this category, so this one goes by personal choice, and I bumped Tamara Jenkins and The Savages because it was the hardest one to find an equivalent for. If The Headshrinkers were in WM2K, it’d be a different story, but them’s the breaks.

Right from the start, Michael Clayton asserts control, taking all three of the other movies outside the ring for a beating, one-by-one. Ratatouille takes a pounding from all three others, but manages to hold its own until Lars lays into it with a chair. The other two join in to gang up on the animated feature, with Michael Clayton securing the elimination at 9:22 via pin. The Clayton vs. The World battle continues for the next two minutes as he squares off with both Juno and Lars. Juno misses a high-risk flying legdrop and Clayton quickly hops on top for the pinfall at 11:25. For the next eight minutes, the brawl went on, marked by Lars And The Real Girl’s inability to finish. After Clayton reaches the ropes on a camel clutch, Lars comes back with a powerbomb outside the ring and a big German suplex inside. A schoolboy rollup and a backslide yield only two-counts for Lars. Finally, he manages to drop Michael Clayton with his trademark brainbuster finishing move, then ties him up in a cradle for the win at 19:23.

Your Oscar winner for Best Original Screenplay, Lars And The Real Girl!

Best Actor
Viggo Mortensen and Tommy Lee Jones were each tied at 25/1 odds, so it was a coin flip. A lot of people would argue that TL’s performance in No Country For Old Men helped secure him this nomination, and pretty much no one saw In The Valley Of Elah, so it is with a heavy heart that I remove him from the list.

Day-Lewis gets saved from early elimination as Clooney’s mandibleclaw was applied too close to the ropes. The assault continues, though, and the heavy favorite is shockingly eliminated at 3:18 after a schoolboy rollup from George. Mortensen’s pounding of Depp is interrupted by Clooney, and Depp regains some control with Clooney’s help. Viggo fights back and gives George a taste of his own medicine with the mandible. Clooney bloodies Depp with a headbutt, and Depp responds by hitting a reverse suplex on Clooney, dazing him long enough for Mortensen to get the elimination pin at 11:23. Now uninterrupted, the Depp/Mortensen brawl continues, ending only when Depp hits Viggo with a package piledriver. He locks in his patented elevated Boston crab for the submission and the win at 13:44.

Truthfully, Laura Linney’s got the longest odds in this one, at 40/1. But it just isn’t fair to shut her out, especially when Blanchett’s got another nomination on the table and because she’s already HAD a Best Actress nomination for playing Queen Elizabeth I in a movie named Elizabeth. Cate’s odds were a hefty 30/1, so it’s not like we’re giving her a Montreal treatment here or anything.

This one is a slobberknocker from the start, as all four ladies take a licking. Linney is the first to go, tapping to a figure-four from Cotillard at 8:26. The match continues evenly with the other three, spilling outside momentarily to give Linney another taste of the action. Page fends of some double team attempts from Christie and Cotillard, but the former eventually turns on the latter to give Page an opening. She capitalizes with a super backdrop from the top rope. A Doomsday Device attempt from Page and Christie falls flat, and their tenuous alliance falls apart – Christie abruptly clocks Page from behind and pins her for a quick elimination at 14:52. Less than a minute later, Cotillard catches Christie off the ropes with a sleeperhold, knocking the favorite out and scoring the upset win at 15:51.

Gilroy and Michael Clayton have the longest way to go, odds-wise. Plus, he’s a much higher favorite for Original Screenplay. So he’s out here.

Reitman, the smallest of the group, keeps his distance from the bigger men. He survives and early scare from Schanabel after a series of power moves. P.T. Anderson and the Coen Bros. go at it practically from the opening bell, seemingly intent on eliminating their stiffest competition early. Anderson succeeds, pinning the Coens after a gorilla press slam at 6:20. With his biggest threat eliminated, Anderson takes advantage of a mistake from Schanabel and practically chokeslams him through the mat, picking up an easy pin at 7:09. Reitman has some bright spots, but for the most part, Anderson manhandles him, throwing him around the ring for the better part of five minutes. After a massive fallway slam, the pinfall – and Anderson’s victory – are academic at 12:03.

At 12/1, Atonement has the odds stacked against it and won’t make it to the ring, despite winning the Golden Globe and a few other awards. It’s a shame, because the whole “so-and-so lied about blah-blah-blah and now whatsherface is pissed and blah-blah-blah’s gotta fix it” is the kind of stuff that flies well in the world of pro wrestling.

9 thoughts on “Wrestlemania 2000 Picks The Oscars”