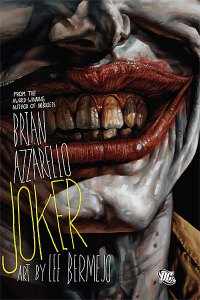 I will admit, I bought “The Joker” to get it autographed at Wizard World.  With both the writer and the artist in attendance, it seemed like a good idea.  The deep discount I got at Barnes & Noble didn’t hurt.

That all be said, this is an amazing read.  Mr. Azzarello, the scribe behind the amazing modern noir of “100 Bullets” returns for a second stab at the Batman universe following his successful run in “Broken City.”

This time, the story is told from the point of view of a guy in the Joker’s gang, Jonny Frost.  As Mr. Azzarello said in his Wizard World panel, why would you want to be part of the Joker’s gang?  They always end up dead.

Gotham City and the Batman universe is reduced to the essential elements.  The only villians used are the ones that could reasonably fit into the modern crime vision of the author.  There is no Mr. Freeze or Poison Ivy, but there is the Penguin in his “fixer” role, the Riddler as a dealer in contraband and Killer Croc as a hood tough with a bad skin condition.

And, if there’s a Joker, there is a Harley Quinn.  We first meet her as a pole dancer.  We later see her as Joker’s lover and primary enabler.  She’s also farther gone than the Joker.

As Jonny and the Joker amp up their crime spree, the bodies start to stack up.  Self-medicating along the way, the Joker takes back what he sees as his.  Johnny starts to see that his boss is not reformed as he claims, but rather is perhaps even crazier than ever before.

Of course, Bat-Man appears.  Its not until late, but even when he’s not in the panels, he’s clearly in the Joker’s thoughts.

I read this, in its entirety on the plane back from Wizard World and I plan to give it another read soon.  Its a classic Joker story in the same way that “Arkham Asylum” and “The Killing Joke” are.  It adds depth to a classic character without painting him into a corner.

Much has been made of the Joker’s clear resemblance to the Joker as played by Heath Ledger in “The Dark Knight.”  According to all reports, Mr. Bermejo had his version of the Joker down on paper before the movie ever hit.  Great minds think alike.

If you’re a Bat-Man fan, a Joker fan, or a fan of Mr. Azzarello give this book a shot.  If you’re none of those things, but enjoy a bloddy noir tale, give it shot.  If I still haven’t described you, give it a shot anyway.  You’ll enjoy it.  It’s a gritty, gruesome good time.