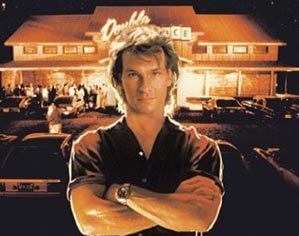 A man puts a gun in yer face, you got two choices- stand there ‘n die or kill the m*th*rf*ck*r! – Wade Garrett

My wife sent me an email from Cleveland on Monday night to tell me that Patrick Swayze had died.  I read it and then did the only thing a GonzoGeeker could possibly do with that news.  I got out my copy of “Road House” and watched it in its entirety.

How is that possible you might ask?  Don’t you have a Road House quote as a guiding life philosopy on your GG page?

You see, Road House belongs to that group of movies I like to call “Inadvertent Classics.”  You know the ones.  The movies you watch 15 to 30 minutes at a time on cable.  The ones you can pick up from any point and not miss a beat.  The ones you and your friends quote in any situation ad nauseum.

Movies like Road House.  And Point Break.  And The Replacements.  And Predator.  And Escape From New York.

So, as I watched the perennial bar based movie house band, Tito & Tarantula blasting away through the opening credits I prepared myself to watch Road House with new reverence.

Yes, I used Road House and reverence in the same sentence.

So we watch Frank Tilghman hire legendary “cooler,” Dalton to come to his Kansas nightclub, the Double Deuce, to clean things up.  Dalton takes the job and shows up in Jasper, Kansas to see exactly what he’s gotten himself into.

He starts by cleaning up the staff, dismissing dealers, thieves and other ne’er do wells.  Then he lays down his three simple rules.

Set to a bluesy soundtrack featuring the Jeff Healey Band, Dalton begins the process of cleaning up the Double Deuce.  In doing so he befriends several of the locals and runs afoul of the local “boss,” Brad Wesley.

He also meets Doc, the comely emergency room physician who staples him up after a knife wound.

As things escalate, Dalton’s mentor, Wade Garrett shows up for back up.

Of course, this all leads to the ultimate confrontation between Wesley and Dalton for the soul of Jasper and the Double Deuce.

What makes this movie so great is, in large part, the supporting cast.

Kelly Lynch is Doc.  She patches Dalton up and then shows up at his barn loft for some sexual healing.

Ben Gazzarra is Wesley.  He doesn’t look dangerous at first, but he’s the typical Napoleon.  He hires thugs and has them do his dirty work for him.

Add to this mix pro wrestling legend Terry Funk, Red West of Elvis’ Memphis Mafia and X’s frontman John Doe and you are looking at an interesting and eclectic mix.

Of course, none of this would have worked without Patrick Swayze as Dalton.  He brings a likeability to the NYU educated zen bouncer that would have looked dopey played by Jean Claude Van Damme and just flat out creepy played by Steven Seagal.

One of the joys of watching this movie again for the first time in 20 years was the realization that it is, at its very heart, just a western.  The stranger rides into town to clean things up.  Gets crossed with local bad guy.  Beats his thugs down.  Loses someone close to him and seeks ultimate revenge before ending up with the girl.

Its basically a John Wayne movie, if John Wayne had known tai chi and ballet.

A movie like Road House owes its enduring success to its timing.  A modest hit at the box office. Road House took on a life of its own when it was released on home video.  You could watch this ridiculous modern American western in the comfort of your own home without having to really admit to liking a Patrick Swayze movie.

Then it hit cable and went into perpetual rotation.  The fact that Road House plays on AMC (American Movie Classics) give me pause to smile each time I stumble upon it.  In fact, in the most recent issue of Rolling Stone, they listed “The Next Showing of Road House” as #35 on their list of 50 reasons to watch television now.

You know you’ve hit a collective nerve when your “B” movie is turned into an off off off Broadway play.

They eventually gave in and made a direct-to-DVD sequel in 2006 which I have avoided like a plague.  I read in a review that Dalton is killed off screen.  If Dalton is dead then so is Road House as a franchise.  Because, let’s be honest, Jimmy from the Wonders is no Dalton, no matter how much stubble he has.

So, with this post I officially kick of my “Inadvertant Classics” series and dedicate them to the patron saint of the subgenre, Patrick Swayze.

Patrick Swayze has gone to the big Road House in the sky, but I just know that tonight he’s standing at the bar drinking a cup of coffee with John Wayne and listening to Jeff Healey wail on his guitar.

And remember kids, be nice until its time to not be nice.