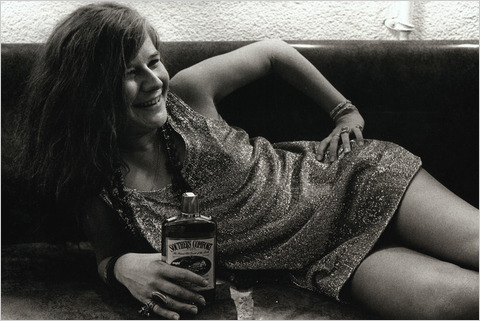 Welcome friends and internet neighbors to our little corner of the web.  Its not an Ebay sized mansion, but we’re pretty happy with our little virtual shotgun shack.  We hope you continue to stop by regularly.

This week’s cheesecake is an interesting pic.  Say hello to Janis Joplin.

I can hear you all saying…WHAT?

Bear with me kids.

Earlier in the week, famed rock and roll photographer Jim Marshall passed away.  Marshall captured many iconic images in the early days of rock, including this GonzoGeek favorite.  He also caught Ms. Joplin in repose, Southern Comfort at her side.  While certainly not a blond bombshell (please note the lower case Jesse James), Janis was/is the blueprint for a hard living, hard rocking chick.  With movie based on The Runaways due to open in a couple of weeks, it seems a good time for all of us rock boys to celebrate the rock chicks.

Thanks for the suggestion Chris.

David Mamet (in all caps) gives former writers of The Unit a refresher course.

Monkey humor, part 2:  I’ve been sent from the future to protect you.

The Death Adder:  a mouse for the left handed games out there.

Alex Chilton from back in the day…

The Einstein of jazz in his lab.

The last of the great rock epics (a la “Never Been Any Reason” and “(I Don’t Need No) Doctor.”)

Organs make any piece of music better.  But what if you want yours to sound more aggresive.  (Organ hat trick)

Movie stars most like to get naked (Harvey Keitel Warning Network activated).

The dangers of reality programming revealed.

Star predicted to blast through solar system.  EVERYONE PANIC (in 1.5 million years).

Great moonsault off the cage call!

It’s the circle of life with a big side order of karma.

Patton Oswalt and John Hodgman meet in the ultimate sci-fi geek off.

And finally, SpikeTV and the UFC finally “get” the internet.