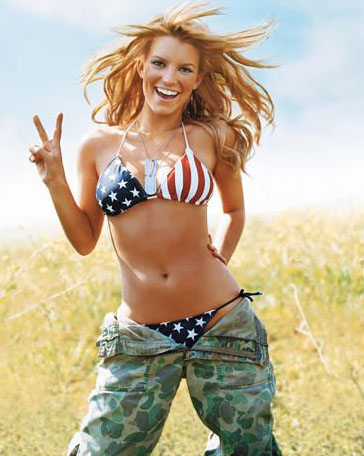 Its time once again for fireworks, family and competitive eating.

And speaking of eating, how about a slice of cheesecake.

Say hello to Jessica Simpson and her patriotic bikini won’t you?

Jess became our cheesecake this week by process of elimination.

I couldn’t stomach the idea of using birthday girl/train wreck, Lindsey Lohan.  Sure Eclipse opens this weekend, but let’s be honest, Kristen Stewart looks like a surly 12 year old boy.  Then there was the tangent where I considered Vivica A. Fox.  I ultimately decided against that one as well (but the first person to post a comment as to why I went down that road will win a special prize.  NO DAVID, YOU CAN’T WIN!).

Then I searched for images of celebrities in patriotic bikinis.

I really wasn’t sure about using Jessica, but then I thought about it some more.  What’s a better way to celebrate the American Dream than Jessica Simpson?  Like some bizarre Horatio Alger meets Judy Blume character, Jessica was the fourth or fifth most talented “singer” in her class, yet remains in our collective consciousness just for being her malapropping self.

Keep on living the dream Jess!

An update on the future of reading books.

Gene and Paul on the passing of original manager and friend, Bill Aucoin.  RIP.

This dude really knows a lot about ants.

Education is bad too.

Should this woman really be on Capitol Hill?, asks Chis.

MORE unwritten rules of baseball.  Could someone please just write these down?

Is a Top Gun sequel in the works?

Wait!  I thought they’d already made one.

Speaking of unnecessary sequels…Apparently Al -Qaeda leaders love the Twilight series too.  I knew those books were WMDs.

And finally, just in case you somehow missed it, Steve Carell is leaving The Office.  Yes, that’s what he said.