Its that time of year.

The games that matter are getting fewer and fewer as the Boys of Summer head into the fall.

Add to that the impending return of HBO’s brilliantly profane Eastbound and Down and me coaching my kids’ baseball team and I’ve got the great American past time on the brain.

I’ll be honest, Kenny Powers of Eastbound and Down was the original inspiration for this list.  As I was looking for a decent Season 2 picture the other day I got to thinking about where Kenny’s place in the Fictional Baseball Hall of Fame.

Its how these things work.

10.  Charlie Brown – I know what you’re thinking?  Charlie Brown?  Don’t you mean football?  Nope.  Charlie Brown, America’s favorite sad sack, is the beleagured player/manager of his sandlot team.  Like Connie Mack and Ty Cobb before him, Charlie had to navigate the dangerous waters of being the man and one of the boys at the same time.  And, like so many managers and coaches before and since, he had a problem with a diva player in the outfield.  I’m looking at you Lucy…and you ManRam.  I’m reasonably sure this, along with his psychiatrist’s continued abuse of him on the gridiron, is what led to his early onset male pattern baldness.

9.  Casey at the Bat – You wouldn’t even be reading this list if it weren’t for the Mighty Casey and his epic whiff.  That a poem written in 1888 is still quoted year in and year out by those involved in the game speaks to the strength of the poem as well as the timelessness of the game.  The poem also serves as lesson to those gifted enough to play the game on a professional level.  Just remember, you’re not bigger than the game.

Oh, somewhere in this favored land the sun is shining bright; The band is playing somewhere, and somewhere hearts are light, And somewhere men are laughing, and somewhere children shout; But there is no joy in Mudville — mighty Casey has struck out.

8.  Sam Malone – As a relief pitcher, “Mayday” made one helluva bartender.  A potentially gifted pitcher with the Red Sox, Malone gave up too many hanging sliders and hit the bottle.  His failure as a pitcher led him to his life’s work, playing ringleader to the gang of misfits that called Cheers home.  As portrayed by Ted Danson, Malone was an affable, if dimwitted, skirt chaser.  He was the eye of the comic storm that was Cheers.

7.  Roy Hobbs – Its a classic American tale.  Kid with limitless potential outduels the greatest player alive, falls prey to a more worldly woman, gets shot, disappears, reappears to lead a hapless Knights team to the championship.  Only Robert Redford could be The Natural.  He is King Arthur of the diamond.  No, seriously.  The book and movie are chock full of Arthurian allusions.  While the ending of the movie differs from the original novel by Bernard Malamud, both are uniquely American tales of redemption.  There are very few more iconic movie images than bleeding Roy Hobbs knocking out the lights after breaking his homemade bat, Wonderboy.

7.  Bingo Long – Played by Billy Dee Williams in the 1976 movie The Bingo Long Travelling All-Stars and Motor Kings, Long is a charismatic star in the 1930s Negro Leagues who chooses to shake off the yoke of ownership oppression and take his show on the road.  In doing so, he takes other players including those played by Richard Pryor and James Earl Jones.  Long is a huckster of the first degree, billing his team as Cuban and Native American do get them games in a still segregated America.  I saw this one as a kid on a late night “movie of the week.”  I didn’t get the undertones then, but I remember being very entertained by the interplay between the three leads.  James Earl Jones would go on to portray the semi-Salinger Terence Mann in Field of Dreams.  Pryor took another shot at the big leagues in Brewster’s Millions.  And while Williams never laced up the cleats again, he did become one of the coolest cats in the universe playing Lando Calrissian in the Star Wars movies. 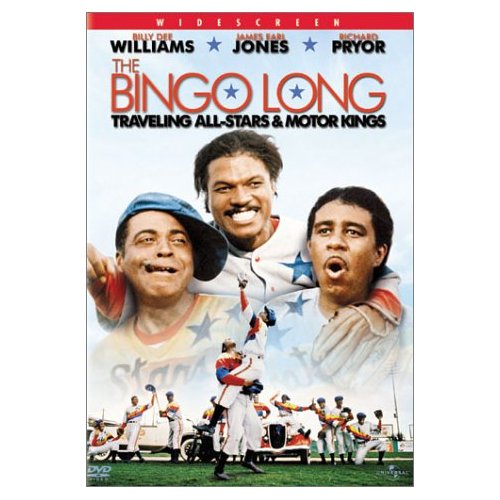 6.  Dottie Henson – #8 on your scorecard and #1 in your hearts, Dottie Henson was the hard hitting catcher for the Rockford Peaches in 1992’s A League of Their Own.  Dottie doesn’t want to play baseball, but does it so her kid sister, Kit, can get off the family dairy farm.  When she’s not mothering her teammates, Dottie is sparring with alcoholic manager Jimmy Dugan, played by Tom Hanks.  Hanks nearly got a nod for his role as Dugan who was based on real life Major Leaguer, Hank Greenberg, but its Geena Davis’ Dottie that makes this film work.

5.  Sidd Finch – On April 1, 1985, George Plimpton introduced the world to New York Mets rookie pitcher Sidd(hartha) Finch in the pages of Sports Illustrated.  Finch was a disciple of a Tibetian “mastery of mind-body” that gave him the ability to throw a 168 mph fastball.  While the news of Finch’s arrival filled Mets fans with joy, it was to be short-lived.  Why?  Because Plimpton executed one of the most brilliant April Fools Day jokes of all time.  The Mets were in on the gag and it must have served them well because they went on to win the World Series the very next season.

4.  Morris Buttermaker – a washed up former minor league baseball player, Buttermaker is working as a pool cleaner when he is approached by a city councilman to take over a Little League team made up of all the players who weren’t good enough to make it onto the other teams, a team known as the (Bad News) Bears.  It doesn’t take long for Buttermaker to realize if his team is going to have any chance at all, he’s going to need help.  That help comes in the form of Kelly Leak, the local juvenille delinquent, and Amanda Whurlitzer, the 12-year-old daughter of a former girlfriend.  If you’re of a certain age, The Bad News Bears, and its two lesser sequels, holds a very special place in your heart.  I was a baseball playing kid when these movies came out and my friends and I ate them up.  They showed us kids acting in ways we didn’t know we could.  Sadly, as a coach of a Little League team now, I find the Bears’ behavior to be far more of the norm.  I wonder if the league would mind if I brought a cooler into the dugout…Buttermaker style!

3.  Ricky “Wild Thing” Vaughn – I’m a long suffering Cleveland Indians fan.  Don’t ask why.  I don’t really know.  We didn’t have a MLB team in Louisiana growing up so, for whatever reason, I picked the Indians.  That the Tribe would be the focus of the 1989 movie Major League was just a happy bonus.  Major League features a Cleveland team full of has-beens and never-wases trying to win enough to keep the team in Cleveland.  Chief among these is Ricky Vaughn, played by Charlie Sheen.  Sheen, a former high school baseball player, brougth a real sense of believabilty to the role of Wild Thing.  Having last played in the California penal league, Vaughn struggles to fit in and find his mojo.  He does in the end, and his arrival from the bullpen cements his place on our list.

2. Kenny Powers – To paraphrase the late Sam Kinison, “we’ve all known some kind of Kenny Powers who made our lives a living hell.”  Powers, the washed up redneck pitcher at the heart of Eastbound and Down, became a cultural icon in only six 30 minute episodes.  He did so thanks to Danny McBride’s willingness to embrace his inner asshole.  Let’s be honest, we’ve all know guys like Powers, guys blessed with natural ability that made them think they were better than us even when they weren’t.  Half of the fun of Eastbound and Down is watching Powers’ complete and total denial of brutal downward spiral.  The other half of the fun is knowing that somewhere, out there, the asshole jock from high school is probably in even worse shape than Powers.

I should note that if Powers did not exist, this spot would belong to Ebby Calvin “Nuke” LaLoosh, the dim-witted pitcher from Bull Durham.  I have a sneaking suspicion that when Nuke eventually blew out his “million dollar arm,” he turned into Kenny Powers.

1.  Crash Davis – From the moment he walks into the Durham Bulls locker room and announces himself as “the player to be named later” until he hits his final dinger and hangs ’em up, Crash Davis is, dollar for dollar and word for word, the best fictional baseball player of all time.  When I had the idea for this list I pencilled him at number one immediately.  I was that sure.

His Triple-A contract bought out so he can mentor the aforementioned LaLoosh, Crash finds his dreams of big league glory disappearing like the exhause of the team’s broken down bus.  He finds himself at war with Annie Savoy over the mind and body of LaLoosh.  Each takes it upon themselves to broaden the mind of the “million dollar arm.”

Crash is one of my favorite characters ever.  He is brilliantly written by Ron Shelton.  Shelton spend several years in the minors and, as a result, his dialogue rings true.  Of course, in less capable hands, Crash could have fallen flat.  Kevin Costner brings a real charisma to the broken down boy man in what is, in my opinion, his best role.

Of  course, no discussion of Crash Davis would be complete without “The Speech.”

So there’s my list.  Agree?  Disagree?  Did I leave someone off?  Drop me a line and let me know.