Wardour St. in Soho. In the spring semester of 1986 I had taken a class called the Sociology of Rock n’ Roll. I liked it. Especially the field work. So much so that I asked the professor at the end if he’d sponsor me in an independent study for the ’86-87 school year further developing some of the themes addressed in the class. After some back and forth we decided that applying negotiated order theory to the rock venue environment could yield some interesting and academically valid results. I was going to be in London studying and both my professor and I also liked the potential cultural comparisons this would add to my work.

During the summer of 1985 I had travelled through London at the end of a back-packing trek that began in Belgrade, Yugoslavia. My brother was with me and we both felt like getting some rock n’ roll action in before returning stateside. I was already familiar with the Marquee and scanned Time Out hoping somebody, anybody would be playing there. A band called The Grip was. I didn’t know anything about them, but it sounded rocking enough, so out we set. We had a great time, including participating in a full end-of-set stage invasion. Being Yanks we didn’t realize this was socially approved behavior so it took some coaxing from the other folks down front. But in the end it was the perfect end to a great night.

Moving forward a year or so, when it came to be time to start figuring out how and where I was going to be gathering my field information there was only one place I really wanted it to be: the Marquee. This was pre-internet days so I started sending letters to one Jack Barrie at the club’s address. I even tried calling a couple of times. But couldn’t even establish two-way communication, much less get his reaction to the idea of a guy he’d never even laid eyes on coming over and working in his club.

About three weeks before my departure I became concerned enough to contact my prof and lay it all out for him, anticipating/hoping he might have a useful Plan B suggestion. But he didn’t seem concerned in the least. He reminded me that musicians, barkeeps, club owners, and the like were not necessarily known for the efficiency of their formal communication and suggested I just establish contact once I was over there and sort everything out.

I arrived, got settled, met my future wife, and spent about 10 days trying to get anyone from the club on the phone. On day 11 I laced up my Doc Marten’s hopped the Northern Line heading south, got off at Oxford Circus, headed west on Oxford, hung a left on Wardour, found #90 and…. knocked. Yes, knocked. It seems ridiculous now that I even bothered. Of course no-one answered. So I tried the door and it opened. The wonderful smell of a closed, dark club hit me instantly.

The ground floor was empty and silent. But the sound of music and at least one person talking caught my ear from the direction of the stairs. I poked my head around the corner, confirmed that’s where the sound was coming from, and started up. About halfway up, I started calling out. No answer. I reached the top, saw a man behind a desk, and knocked on his open door. This man was Jack Barrie. I introduced myself, explained the nature of my calling, and inquired as to whether he had received any of my correspondence. He said he seemed to remember seeing something like that and asked me to go through one more time what exactly it was I wanted.  There were papers everywhere.

“Well. I’d like to have open access to the Marquee, and in exchange for that I’d be happy to work wherever you could use me.” ”

He pauses. “So you want to work here for free?”

A handshake consumated the best kind of business meeting, the one where both parties leave feeling like the cat who ate the canary. The final deal? I could come and go wherever, whenever in exchange for actually working 3-4 nights a week. I came back the next afternoon, met Bush (house manager), who introduced me to John and  Fido (sound and lights) respectively, and the rest, as they say, is history. 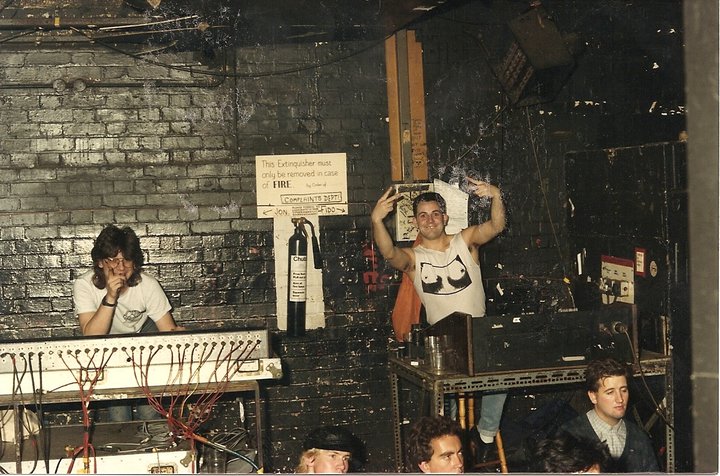 I spent most of work time as a stage hand/go-fer. Along the way I became fast friends with a Scottish photographer named David Noble who also was somehow always on hand taking pictures. One night David, his wife Linda, and I hit the after-hours party across the street at the St. Moritz. Among my more vivid recollections of the evening were some giant group dance to Sweet’s ‘Ballroom Blitz’ and sitting down at the bar, introducing myself to the guy next to me, and making it about halfway through my pint before double-taking and saying ‘hey…you’re Gary Barden! (much beloved – by me anyway – singer in the original version of the Michael Schenker Group). Not only did he not run in horror at my obvious starstruckedness, he was actually a great geezer and we sat there for another couple of rounds talking about nothing in particular.

But the main attraction was the steady stream of generally topshelf music to which I had non-stop access. Bernie Marsden/Micky Moody, Rouge Male, Pallas, the Primatives, Adam Bomb, Dumpy’s Rusty Nuts, Fields of the Nephilim all played. But my favorites, and fortunately all regular performers during my time there, were the Queerboys, the Godfathers, Torme, and the Babysitters.

I now present you with a sample of each of their work.

The Queerboys later became (and almost broke in the US as) the (London) Quireboys. I once saw guitarist Guy Bailey leaning in a doorway near Camden Market on a bright sunny day having a smoke. I knew it was him. He was wearing most of the same stuff he’d show up before a gig in. So I grabbed a lean on the wall next to him and said hey. He was polite enough, but eventually said ‘Who do you think I am?” “You’re Guy from the Queerboys.””No I’m not. That’s my brother.””Yes, you are.””No I’m not.” It went on for a few more rounds. I finally got up off the wall extended my hand and said goodbye. He gave me a big handshake and an even bigger smile and that was that. The band didn’t play the club again before I left, so to this day I don’t know if he was having me on or if he really did have a doppleganger brother.

The Godfathers in 1986 were simply as cool as cool got. A bunch of dudes in shirt and tie playing some of the best rock you were ever going to hear live. And live was truly their element. Their recorded output was good. Their live show never short of great. This particular track is one of my two favorite Beatles-related covers ever (the other being a live  ‘He Said, She Said’ Overwhelming Colorfast used to do).

Torme was guitarist Bernie Torme’s solo act. Perhaps best known over here as the guy who first stepped into Ozzy’s band when Randy Rhodes died, he was already a well established axeman in the UK when that happened and remained one in 1986. Torme also featured a post-Girl/pre LA Guns Phil Lewis on vocals.

The Babysitters were quite simply the funnest (yes, funnest) rock n’ roll band on earth, like Poison’s retarded little brothers. It is interesting to contemplate where they might have gone if Razzle hadn’t been offed and Hanoi Rocks continued on, perhaps shifting the axis of the 80s explosion slightly in a European direction. I made sure to see them everytime they played, and on one night in particular took the night off so I could fully participate in the evening’s fare. At 9:13 in the video below, Buttz, the frontman, points to camera and urges one of the punters down front to smile. He is me, caught for all-time experiencing rock n’ roll heaven.

FOOTNOTE: John and Fido were two great guys to work with, never hazing me too badly but always keeping me on my toes. I saw Fido a couple of times in the aftermath, once in Blackpool working for some old dude on tour and the last time in 1990 or so when the Godfathers played the old 9:30 Club in Washington D.C.