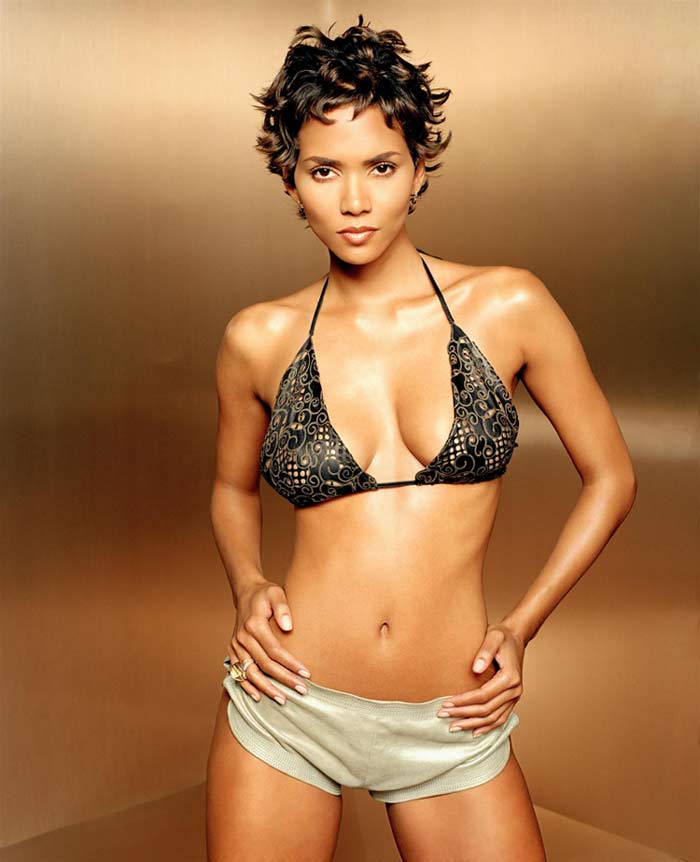 Can you feel the excitement kids?
It’s Oscar weekend, that magical weekend where we all tune in to watch Hollywood give itself a massive handjob.  Don’t get me wrong, I like the speculation as much as anyone (see GonzoGeek v. The Oscars).  It just seems a little silly that all these movie folks spend hours handing out statues in categories that none of us really care about.  In truth, the Oscar telecast could be a one-hour special if they really applied themselves.
However, if the Oscars serves to get some of our favorite leading ladies on the small screen in our homes it can’t be all bad.
Case in point, say hello to this week’s cheesecake, the 2001 Academy Award winner for Best Actress for her work in Monster’s Ball, Halle Berry.  Ms. Berry was the first African-American woman to win the coveted statue.
Ms. Berry is one of those inevitable cheesecake selections.  Much like this year’s Best Actress frontrunner, Natalie Portman, I knew we’d get around to her sooner or later.  Oscar Friday seemed like the right day.
Ms. Berry’s geek cred is solid.  Besides her Academy Award winning role, she also portrayed X-babe Storm in the first three X-Men movies, Jinx in the James Bond blockbuster Die Another Day, a doomed stripper in The Last Boy Scout and reportedly got paid a cool mil to go topless Sin Swordfish.
I think we can all agree not to mention Catwoman can’t we?
Enjoy the show.
On to the links.

Bet on your own grades!

For all you techno-heads and/or vintage Roland keyboard fans.

Suddenly the NFL has bigger problems than a looming lockout.

….while Australian Rules Football gets low

The revolution will not be televised.

Do you believe David Koch’s got YOUR back?

The 50 worst band photos ever.

Sam Kinison strikes from beyond the grave!

Remember those books that rocked your world at 16?  How do they stack up now.

Fred Durst gets immortalized in Austin.

What does the future hold for Pandora Radio?

The Wolfpack is back!  The Hangover Part II trailer hits.