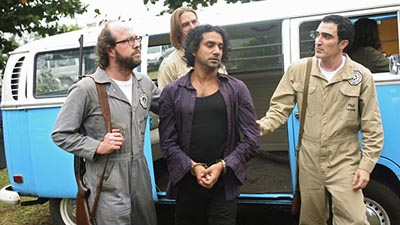 A review of the past week’s episode of LOST from a frustratedly loyal (and loyally frustrated) fan. This week: It takes a whole episode of manufactured tension for Sayid to finally do what he was born to do in “He’s Our You”.

James “Sawyer” Ford: Three years, no burning buses. Ya’ll are back for one day…

A. First of all, I’m not buying any misdirection on whether or not Sayid was once a good person, even if the kids from Slumdog Millionaire are prominently involved. It’s not like he hits puberty, grows hair in new places and is suddenly cool with the idea of shoving bamboo under a grown man’s fingernails. That shit comes natural. If anyone needed a whole episode to learn that being Iraq Bauer comes naturally to him, then maybe you should try watching LOST once in a while. Secondly, Mr. Eko just looked up from his invisible chess game with Hurley and called Li’l Sayid a pussy. Shoot someone in the head before you hit 10, then he’ll be impressed.

B. Also, his ability to snap a chicken’s neck to avoid an ass-beating from Papa Jarrah foreshadows nothing about his eventual life trajectory. What I learned is that he can do the same thing he’d probably watched his dad do once a day – kill a caged animal so the family can eat. He didn’t track the chicken across two continents, pose as a wealthy but brash businesschicken, arrange to “randomly” run into the chicken in a crowded bar, strike up a friendship, challenge the chicken to a round of golf and then gun him down on hole 12 before the beverage cart came around. This chicken didn’t even give up any chicken secrets before Li’l Sayid finished him off. As far as torturers go, that kid was definitely a work in progress.

C. Maybe he wouldn’t have been in danger from bounty hunters if he wasn’t so cavalier and conspicuous about the murders. I’ve watched enough television to know that people can do it up all secret-like and keep the law guessing. Instead, his strategy is to execute the men openly and get laid then execute the women, then walk away in both instances like he’s totally not leaving a murder scene, he’s just an oddly well-dressed Iraqi man with flowing luxurious hair who doesn’t know what you’re talking about. Interpol probably has a terror warning out for “the Middle Eastern Fabio.” He could have at least worn a mask.

D. Ben probably could have saved the money on a ticket to Russia if his grand finale for a litany of political assassinations was just “nice work, laterz.” For all the effort it took just so he could give a two-minute summation and leave Sayid in the middle of the road (like it was a mission on Grand Theft Auto: Widmore Edition or something), he could have focused on buying better clothes. This is a clue to the future of the show: he’s spent his whole life in either Jumpsuit Junction or living amongst the Tree People. He has no idea how to dress himself! He wasn’t wearing that hat to conceal his identity. It was dark and he was in Moscow, where everyone is pasty with sunken eyes. No, he wore that hat because he thought it was a good idea; for all the hints we’ve been given that he shouldn’t be trusted, his choice of attire screams loudest.

E. If Sayid’s bitter hatred of Ben was because Ben considers him a natural born killer, then maybe Sayid should try watching LOST once in a while.

F. It was a relief to find out Ilana was a bounty hunter and that her weird cougar-y manhunting skills at the bar weren’t real. Should I have been more ashamed for her after acting like she was the femme fatale in a bad student film, or for Sayid because he bought into it and was equally uncomfortable without having ulterior motives? Their flirting was so unnatural that they probably checked into that hotel under the names “Jack” and “Kate.”

G. SURPRISE I AM NOT A POTENTIAL LOVE INTEREST BUT IN FACT A CATALYST FOR YOUR RETURN TO THE ISLAND AND IF YOU WILL ALLOW ME APPROXIMATELY FIFTEEN SECONDS I WILL EXPLAIN HOW THIS MAKES COMPLETE LOGICAL SENSE FOR YOU SEE WE HAVE TO TRAVEL TO GUAM BECAUSE THAT IS WHERE ALL IRAQI ASSASSINS WHO KILL ITALIAN MEN IN THE INDIAN OCEAN ARE SUPPOSED TO STAND TRIAL. ALSO WE WILL BE TRAVELING FIRST CLASS BECAUSE APPARENTLY MY PRIVATE BOUNTY HUNTER CONTRACT FEES ARE HIGH ENOUGH TO ABSORB THE EXPENSE AND I ENJOY A LITTLE EXTRA LEG ROOM. 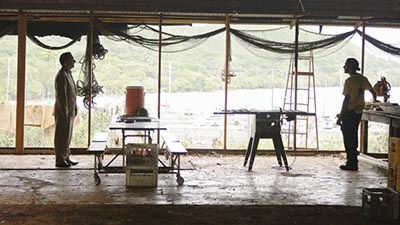 II. Because It Would Make Too Much Sense For All Of Us To Agree On A Course Of Action For Once In Our Lives

A. I didn’t get a good look at the title on Phil’s lapel, but if it doesn’t say “Plot Device” then someone in Dharma Human Resources is doing it wrong.

B. Didn’t anyone think Radzinsky needed a nickname? I get it, I’m supposed to remember that eventually he blows his own head off in the Swan Station. But seriously, every time he has an outburst (“teh model! teh hostiles!”), which is like every 30 seconds he’s on screen, someone has to admonish him with the full last name. If Sawyer has spent three years around this man and he doesn’t have a pet name besides “Stu”, then something is seriously wrong with Sawyer and we all need to talk about it.

C. Ok, you have to perpetuate the three year lie because you don’t know how people would react to knowing the truth, but once you spend a chunk of time with the Dharma people, specifically the ones who are STUDYING TIME TRAVEL, wouldn’t it be a halfway-decent idea to consider opening up? You’re not blowing anyone’s mind per se when you talk about coming from the future, and maybe starting a dialogue with the guys who are researching time and space might mean you’ll get to see high-top shoes and cell phones again one day. Right now, Dr. Francois Candlewax is filling shifts at the registration desk; he’d be THRILLED to find out someone from the future is around and that his work might actually lead somewhere.

D. After four and two thirds seasons of feeling like Sayid was the most competent decision-maker on the Island, he completely blindsides me here. If I just found out it was 1977, my first choice wouldn’t be “I gotta get the hell away from the small handful of folks who understand what I’m going through at the moment.” What will escaping to the jungle solve? Has he been waiting for his chance to live the Rousseau life ever since she captured him in Season One? All of a sudden he makes no sense, which puts him on par with everyone else. It has to be the beard.

E. It hasn’t been a week of real time since Jack and Kate got busy and then got on a plane, and she’s openly moping and/or planning her impending homewrecking at the lunchtable with him. I can’t wait to see what happens when Kate asks Sawyer to the Sadie Hawkins Dance first. No wonder Juliet decided to keep an eye on her at the Passive Aggressive Body Shop. Also, Hurley has two types of episodes: the emo “why is this happening to me; also, Cheech Marin” episodes and the random cameo “HEY, audience, I kinda say what you are thinking, that is if you are all black holes of personality with telegraphed emotion behind everything you say” episodes.

F. When you’re the janitor, throwing food on the ground to prove your point isn’t very effective when you’re the one who will have to come back and clean it up later.

G. “He’s our you” could have meant any number of things, but “our guy who makes people tell the truth” is kind of insulting. Sayid’s not an interrogator; he’s a torturer. I know this because of the times when he said “My name is Sayid Jarrah and I am a torturer.” Living in a tee pee and making people drop brown acid is NOT torture by the Jarrah standard.

H. It’s nice to see that truth serum makes Sayid giggly, because if we’ve learned anything about him, it’s that he’s really a genuinely happy person on the inside once all of his defenses are stripped away.

I.  What good does three years of posturing and book-reading do Mr. Winston Churchill when he can’t stop a room full of people from pulling some Lottery-ass shit on one of his buddies?  Based on the general principles of the Dharma Initiative, saying the new guy needs to die because he might have seen Radzy’s diorama is maybe extreme?  Meanwhile, Sawyer/LaFleur is the tall, intimidating HEAD OF SECURITY with a gun practically sewn to his shoulder, a home library and an endless supply of snappy jabs and he’s being outmanuevered by the A/V dork who does nothing but watch TV and make models all day.

J. Not to weep for Li’l Ben, because I’ve advocated that he had it coming for a while now, but you gotta blame that on Sawyer and Co. for not being a little more forthcoming with any of the new-old peeps. I think that the first part of orientation needed to be “remember that total jag who kept ruining and re-ruining our lives about three years ago? well he’s here as a kid, but you can’t kill him because _.” Even if it was something like “because Hurley’s been hugging him once a day for three years and we’re starting to see progress,” it was worth sharing to keep Sayid from doing exactly what he should have done, which is put his special skills to use and solve the problem. 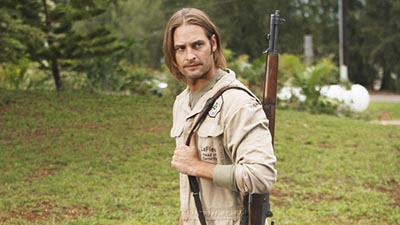