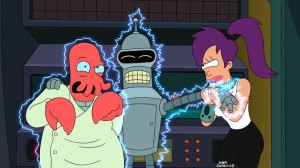 The newest installment in the “Futurama” franchise to get the big screen treatment.

Congers, NY (October 14, 2008) – Wizard World Texas is proud to host a screening of the latest DVD film in the dynamic “Futurama” dynasty on Saturday, November 8th with an encore presentation on Sunday, November 9th. This is a rare opportunity to see this epic on the big screen.

Park your hover-car and saddle up your unicorn for the most fantastical “Futurama” yet: “Futurama: Bender’s Game.”  With fuel prices skyrocketing, the Planet Express crew sets off on a dangerous mission to infiltrate the world’s only dark-matter mine, source of all spaceship fuel.  But deep beneath the surface, they discover a far stranger place…a medieval land of dragons and sorcery and intoxicated knights who look suspiciously like Bender.

“Wizard World Texas is thrilled to be able to offer this rare opportunity to show ‘Futurama: Bender’s Game’ on the big screen,” said Wizard Entertainment Senior VP/Operations Joe Yanarella. “I’m sure the legions of ‘Futurama’ fans will love the experience.”

Wizard World, the largest family-friendly comics and pop culture convention in the United States, returns to Texas November 7-9 at the Arlington Convention Center. Be sure to go to www.wizardworld.com for updates about guests and programming and to save 20 percent off the price of tickets by ordering them online now.

Wizard Entertainment is the industry leader in the comic book and collectibles market that publishes Wizard: The Magazine of Comics, Entertainment and Pop Culture, ToyFare: The Toy Magazine and Anime Insider, as well as Toy Wishes: The Ultimate Guide to Family Entertainment and Special Operations. Wizard’s publications have a monthly national readership of more than two million and are currently sold in 25 countries and five languages. Wizard World, the convention division of Wizard Entertainment, is a four city tour that brings the best in comics, film, television, anime and collectibles to Los Angeles, Philadelphia, Chicago and Texas. WizardUniverse.com is the online for all of Wizard’s publications and its content spans the full range of Wizard’s pop culture subject manner. For the latest news of interest to readers of all Wizard publications, Wizard Universe can be found online at www.wizarduniverse.com